Last week our schools observed Orange Shirt Day (as shown here in pictures from all three campuses).  It was a day to honour indigenous people who survived Residential Schools and to remember those who didn’t.  Wearing an orange shirt, especially in Oiler country is pretty easy.  But it was another small step in our walk of reconciliation.  It was another small step in cultivating community.

There was one group of students at West school whose observation of Orange Shirt Day seemed to go a bit deeper.  Here are a couple of phrases from their journals that day:

“…they act like we aren’t people and we don’t have souls.”

“Our whole race got wiped away…”

What brought out these strong feelings?  These grade seven students and their teacher, Mr. Hoover, didn’t know it at the time, but their whole month in Social Studies was leading them to more deeply understand what Orange Shirt Day was about.

In that first week of school, students got into groups and began creating a culture with all it’s beliefs, practices, languages, foods, customs and ways of life.   They really got into this.  They dug deep. They gave the cultures names like Arbré or Alrack.  When they were ready, cultures began interacting with other cultures by trying to explain themselves without the use of any English words. The language barrier was frustrating!  Subsequent classes saw the cultures decide on and participate in “events” such as expanding their territory, making alliances with neighbours, going to war,  farming new crops etc.    While the events themselves were student choices, the outcomes of these events were determined by the teacher rolling a dice.  There were peaceful times and times of conflict. Some cultures flourished and others were almost wiped out as their populations dwindled. 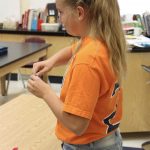 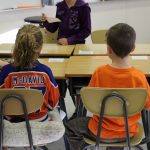 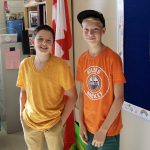 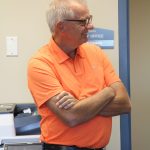 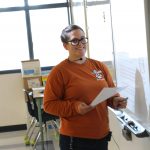 One day,  a new culture, the Hooverians arrived in their ships.  They had some different goods to trade for the resources the other cultures had. While some things worked well, overall their interactions with those cultures lead to distrust, conflict and in-fighting.  Hooverians moved into territory previously occupied by others.  They questioned and at times mocked some of the cultural practices.  The changes they brought and the effects these changes had on the other cultures were significant.  This was just a month-long simulation, but these students FELT it. (It’s impossible to adequately summarize a whole month of work in a few words, so if you know one of these 7th graders, ask them for details of their learning!) 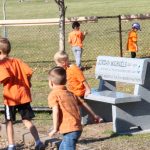 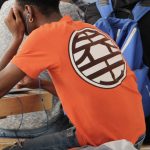 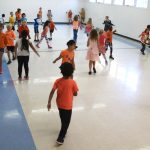 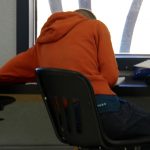 With those activities as a background, Orange Shirt Day became more real.  This can be seen in some of the feelings the students journalled along the way.  Their last journal entries on Orange Shirt Day were poignant.  Here is one complete one from Alexa.

A man came. I saw him talk to the Chiefs.  He gave us tools and stuff. I didn’t trust him, and I was right. He took me and some other kids. Mama was crying. I was too. They took me away with the kids of other ages.  I went far, far, far away.  A big lake is now my view. They tell me that what I believe is wrong. I don’t know anymore. But one of my friends said something bad and I didn’t see him anymore. I miss home. I miss the forest. I feel sad and alone. No more Abré girl.  I’m not Hika  anymore. I’m Helen. Helen from the west.

Was this simulation a complete picture of our history with the First Nations, Inuit and Metis people in Canada?  Of course not.  Like the Blanket Exercise some students did last year, it gave only a glimpse.  It only helped us to dig a little deeper so that we can understand what our role in this reconciliation story might be.  After all, as broken people loved by God  this isn’t the first reconciliation story we’ve been part of!