It is widely purported that C.S. Lewis once said, “My prayer is that when I die, all of hell rejoices that I am out of the fight.”  In actuality,  the quote likely belongs to another author, C.T. Studd and the concept of Hell rejoicing is at very least debatable.  That debate will need to be left for another day.

IF hell could rejoice at the passing of one of God’s faithful servants, then on October 2, 2018 the party there was on, as Doug Monsma was taken out of the fight, much too soon.  Aside from the immeasurable role Doug played in the life of his family and friends, he was a giant in Christian Education. His work has influenced schools, classrooms, teachers and students worldwide.

I’m pretty sure that Doug would not be fond of me characterizing his work as a fight.  Whether it was his teaching and leading at Edmonton Christian Schools for 27 years or his work with the Prairie Centre for Christian Education for 6 years, he did it with passion and joy and an endearing sense of humour. Though he was an incredibly wise man, he sought input from others and used it to shape his work.  He established friendships with educational leaders. He influenced and shaped the lives of students, teachers, board members and administrators. One could enter an expanding number of schools in Alberta, BC, Manitoba, Ontario, Minnesota, South Dakota, Iowa, Michigan and Washington to meet people and to observe Christian Schools being revived by thinking of their work as transformational in God’s story.  One could cross the oceans to Zambia and to Australia to find Doug’s passion for making sure Christian Education was relevant and story-filled spilling out into schools there. 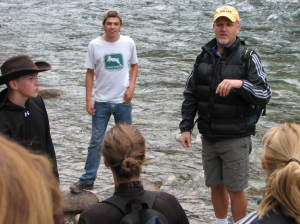 It wasn’t a fight for Doug.  It was simply, his part in HIS-story.  Those who knew him knew that vocationally Doug had done, through his work, what he encouraged so many others to do; he had found his place in God’s story.

So, in Christ’s upside down Kingdom, it is actually God’s people who tearfully rejoice; Doug’s legacy will be lived on through faithful people who were mentored and inspired to find their place in God’s story as it is written through Christian Schools.  God’s people rejoice in knowing that Doug is with the Maker of All Things, beholding the beauty and wholeness that he championed in his work. Doug now sees the whole beautiful, epic story. Though we grieve his loss, it is us who rejoice in such sure knowledge.